How are declining ebook sales a ‘mixed blessing’?

Here we go again. Once more, statistics showing that ebook sales have slowed down in the last year have the industry shouting out that the only logical explanation must be that the print format is regaining it’s former glory and momentum as the champion of the written novel. I don’t know how to put this, so I’ll give you my initial reaction – no.

This article on Publishers Weekly announced that many people were hopeful that the decline in ebook sales meant that the industry was evening out into a more predictable and stable market. Steve Zacharius even called it a ‘mixed blessing’. Perseus Books Group CEO David Steinberger stated in support of the hope, “A healthy, diverse marketplace with multiple format, price point, and channel choices for the consumer is generally a positive for readers, authors and publishers overall.”

Overall, a stability in the market wouldn’t be a bad thing, but I think that these people hoping for a resurgence in print books are a tad misguided. Most of the statistics being used to create these conclusions might even have been misinterpreted. For example, growth in 2012 partially had blockbuster trilogies like The Hunger Games and Fifty Shades to thank, due to their exceptional ebook sales. There was no such hit series in the first half of 2013, which means that ebook sales would probably be lower than the previous year. You really need to compare like with like to get a fair and accurate result. And it’s not even as if sales are negatively down – the sales increase simply isn’t as high as 2012 – 5% in the first half of 2013, compared with 44% across the whole year in 2012 (according to the AAP StatShot report). If they expect the same rates to continue, then publishers can’t expect this ‘stability’ to last.

Meanwhile, industry experts are declaring that “the chapter of incredible growth has wound down.” Continuously, the publishing industry compares print and ebooks, when that isn’t what they should be doing. Like television and film, yes there are similarities, but you wouldn’t compare the weekend takings of a new blockbuster with the weekly episode of House, would you? They live side-by-side, complementarily, but shouldn’t be compared with each other. 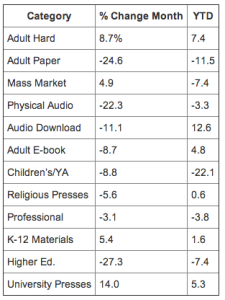 The AAP StatShot for 2013, as shown above, shows a variety of statistics on ebook sales in North America.

Just because one format is seeing a slight decline of sales (after the skyrocketing figures that ebooks have produced in the last 5 years), does not mean that the people no longer buying ebooks are now inexplicably turning to print books. That just doesn’t make sense. Nor are new consumers suddenly opening ereaders or print books, because this industry is already a fairly mature one – chances are, people who weren’t previously interested in books are not going to spontaneously flock to ebooks just because the format has changed. People who love books are most likely already in their format of choice, and no amount of new ereader technology will change that. The market for ereaders and ebooks has existed for long enough now that because a large portion of the print book market has moved over to ereaders, device sales will fall – but people are erroneously interpreting that as people moving back to print.

A point that the Publishers Weekly article made that I hope happens, is the breathing room that booksellers will now feel that “the slowdown” is on. This breathing room, whether real or imagined, will hopefully encourage innovation for publishers and booksellers alike in their selling and content distribution strategies. Figuring out what sells best in what format could benefit both the ebook and brick-and-mortar sellers.

So if I had to make a concluding statement from this blog it would be directed at publishers: Stop equating the stabilisation or evening out of ebook sales with a renewed interest in ebooks. Because even if that was true, it wouldn’t last. You’ll be sorely disappointed, this time next year.