Since Barnes & Noble’s former CEO, William Lynch was dismissed, the Internet has been rife with discussion about the imminent death of the company. But is it really time to start preparing for the demise of yet another bookselling chain? It feels like yesterday we said goodbye to Borders.

On the surface, it might seem like Barnes & Noble (B&N) are doomed, but on closer inspection it seems they still have a few tricks up their sleeve.

When the bookstore chain hired Lynch as the head of its online business, they had relinquished almost all of their digital book business to Amazon.

So, in 2009, when they were fed up with losing profit to Amazon and its shiny new Kindle devices, they attempted a digital transformation of their own.

Lynch opened a large office in Silicon Valley and hired 300 programmers, developers, and designers to create something that would rival the Kindle.

What they came up with was the Nook brand.

Two years later, Barnes & Noble had managed to purloin 25% of the digital book market from Amazon – a market that at the time was worth a mere US $2 billion.

Back then, the future for America’s beloved B&N looked positive.

Microsoft had announced a $300 million investment in Nook Media, which incorporates the Nook division and almost 700 university bookstores.

Barnes & Noble also launched Nook in the UK and planned to roll it out across 10 international markets by the middle of 2013. Plus, new tablets were in the pipeline, and it was suggested that the company might even drop the word booksellers from its name.

This would be an indication to the world that B&N wasn’t tied to the past by a fixation with physical books, and was instead serious about its future.

However, despite all of this positive news, when the financial results for 2013 were released, Nook recorded an operating loss of $475 million on $776 million.

Since then, Lynch has been removed as CEO and Nook has failed to launch in a single international market.

It seems as though B&N are pulling out of the tablet business altogether and the reason for this turnaround is simple: Nook Media’s tablets just aren’t able to compete with Amazon’s Prime on Demand service, or Apple’s iPad. 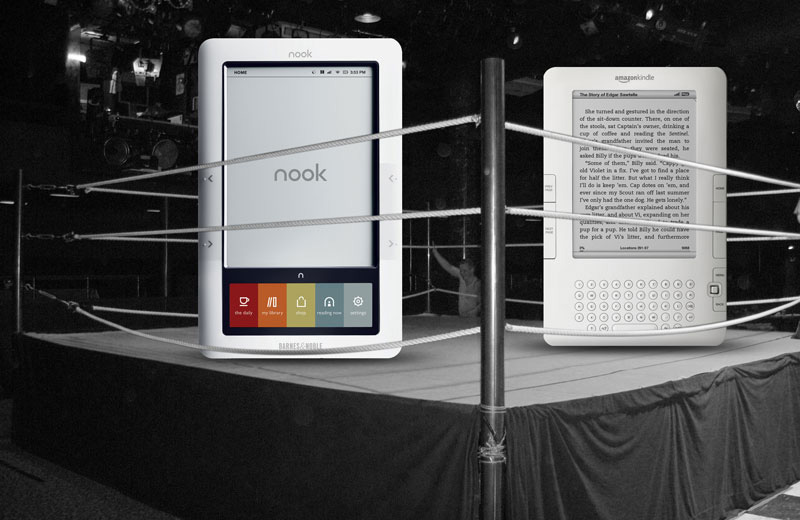 On the bright side, 95% of B&N’s bookstores are still profitable.

Even though sales fell by 5.9%, stores still managed to generate $4.6 billion revenue and a profit of $374 million, which was still a 16% lift on the previous year.

This was partly due to the fact that without any serious brick and mortar competitors, B&N didn’t need to discount their books as heavily as in previous years. It was also thanks to the company’s extension of its selection of non-book items, such as games and toys.

To avoid the demise that everyone is forecasting, Barnes & Noble have decided to refocus on what they have always done well…selling physical books.

And as Mike Shatzkin observes, this places B&N in a unique position. Unlike their competitors, who are looking to capture customers migrating from old patterns of book buying to new patters; B&N are trying to keep customers who came to them to buy print books in stores.

Not only are their bookstores trading well, there’s still one field in which they dominate Amazon, and that’s textbooks.

The university bookstores operated by Barnes & Noble make a reliable income from selling textbooks because university lecturers and administrators are reluctant to convert students to digital learning platforms.

They, and many of the other bigger booksellers are overlooking textbooks as a source of revenue.

While, it’s hard to imagine a company as large as B&N keeping themselves alive on textbook sales, it’s good to see that their niche university stores have been able to serve as a fallback plan.

It’s hard to predict where Barnes & Noble will be at the end of this financial year, but they aren’t alone in their commitment to print publishing.

The newly merged Penguin Random House, who is now responsible for 50% of commercial trade books sold in the US, also wants B&N bookstores to keep trading.

With support of this calibre, a stable textbook business, and profitable bookstores, maybe Barnes & Noble will emerge victorious after all.

Or maybe they’re delusional and naive to think they can survive the digital revolution by coffee mugs and trinkets.