Understanding audience engagement and customer segments is imperative to the success of an app. One common mistake companies tend to make, is to assume that majority of users will download an app as soon as it’s launched. Unfortunately, this is unrealistic and rarely happens. Instead, an app is incrementally adopted across five customer segments.

So here’s our take on the Innovation Diffusion model. The Diffusion of Innovation or otherwise known as the Innovation Diffusion Model explains the how, why and what rate that technology and new ideas spread through the market. The creator of the model, Everett Rogers argued that diffusion is the process whereby an innovation is shared amongst people through certain channels over time. Furthermore, an innovation is understood as the application of effective solutions to meet market needs in a new way.

Firstly, the Innovation diffusion model is based on five core elements, which impact the influence of a new idea:

Therefore, we can use this theory to understand how your target market will embrace your app over time. Whether you’re creating a public or private facing app across a wide range of industries – understanding these user types will be relevant to how you launch and market your app.

The Innovators are the first group to download your app and usually comprise of about 2.5% of the market. The Innovators are willing to take risks when it comes to new technologies and try unready products. This risk tolerance means they are willing to work through a few errors when using your app. In turn, they are able to provide initial feedback to further develop your app to achieve mainstream success.

Key Takeaway: Therefore, Innovators can function as lead users by providing insightful feedback to further develop your app before entering the mainstream market. So make sure there is a feedback loop in place from the very beginning, otherwise innovators could disconnect from your app and possible app improvements will be lost. This can be as simple as providing an email address for Innovators to send their ideas to.

Next we have the Early Adopters, which is the second group to adopt your app at about 13.5% of the market. Early Adopters have the highest opinion leadership amongst the adopter categories. Therefore, creating a positive user experience for this customer segment could attract the remainder of the market. However, Early Adopters are not as risk tolerant as Innovators as they are instead more discrete in their adoption choices.

Key Takeaway: Seeing as Early Adopters have the highest opinion leadership, your organisation could implement a reward system for sharing your app with their own network. For example, free in-app downloads when they share the app with 5 colleagues. Furthermore, capturing feedback in the form of testimonials is a great way to harness the Early Adopters’ opinion leadership within the market. 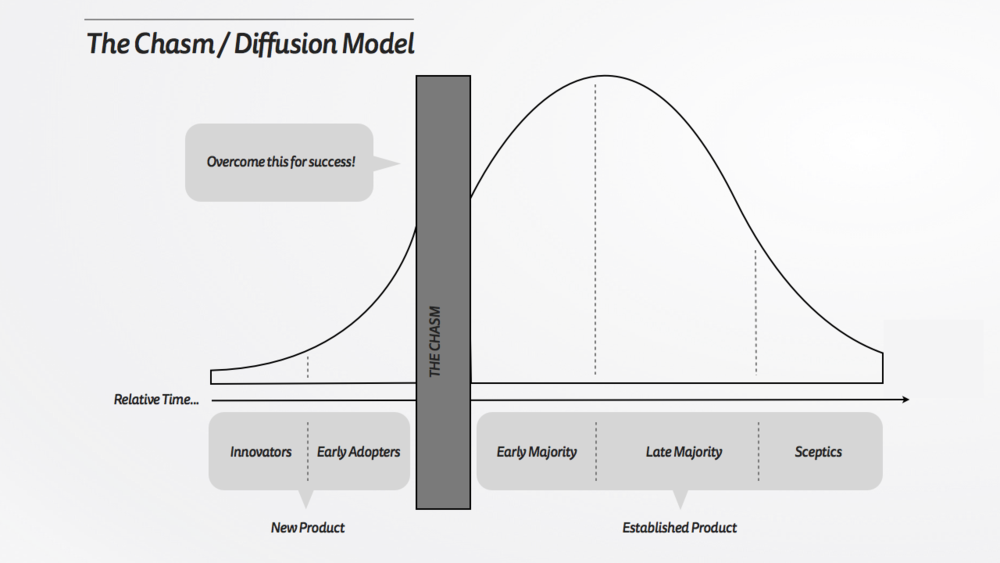 However, Geoffrey A Moore argued that there is often a chasm between the Early and Mainstream Markets. This occurs, as there is a disassociation between the two groups of Early Adopters and Early Majority. Therefore, to cross this chasm it’s often required to further develop the app or dramatically increase marketing to better target the Mainstream Market. For example, updating app content and features based on lead user feedback could allow the Mainstream Market to install your app with minimal work or associated risk.

Key Takeaway: Extensive marketing and at times, content development is necessary to cross the chasm and effectively target the Early Majority. Specifically, your organisation could showcase the benefits and developments generated from Early Market interaction to market your app. Knowing that the Early Majority are followers, you will be able to craft effective marketing campaigns, which align your app’s benefits with the user’s needs.

Key Takeaway: Therefore, the key to capturing the Late Majority is to highlight the market acceptance of the app across the previous customer segments. This is where testimonials will once again be useful.

Finally, 16% of the market includes the Laggards, which are the last group to download your app. This is the most resistant and conservative group as they are averse to change and ultimately, risk. Specifically, they are more focused on traditional ways of doing things and critical of new ideas until they are widely accepted.

Key Takeaway: To attract the Laggards, it could be useful to market how your app will improve their current process with minimal change. Specifically, understand and communicate how the benefits of your app will align with their needs and wants.

Of course, this isn’t a perfect science as variations in audience demographics and external factors can influence the market acceptance of your app. Ultimately, the success of your app is dependent on how you continuously develop engaging content based on user needs, product purpose, key analytics and user feedback.