Staring into the Publishing Void

The constant decline in advertising revenue for magazine publishers is a worrying statistic that has not only seen the closure of iconic titles and long standing businesses, but also the departure of friends from the industry.

In Australia we have experienced yearly ad expenditure reductions by up to 17% in some cases, and the percentage of adspend for magazines has been steadily dropping from a total of 9.4% in 2006 to 4.3% in 2013; according the the annual World Magazine Trends published by FIPP – the worldwide magazine media association. 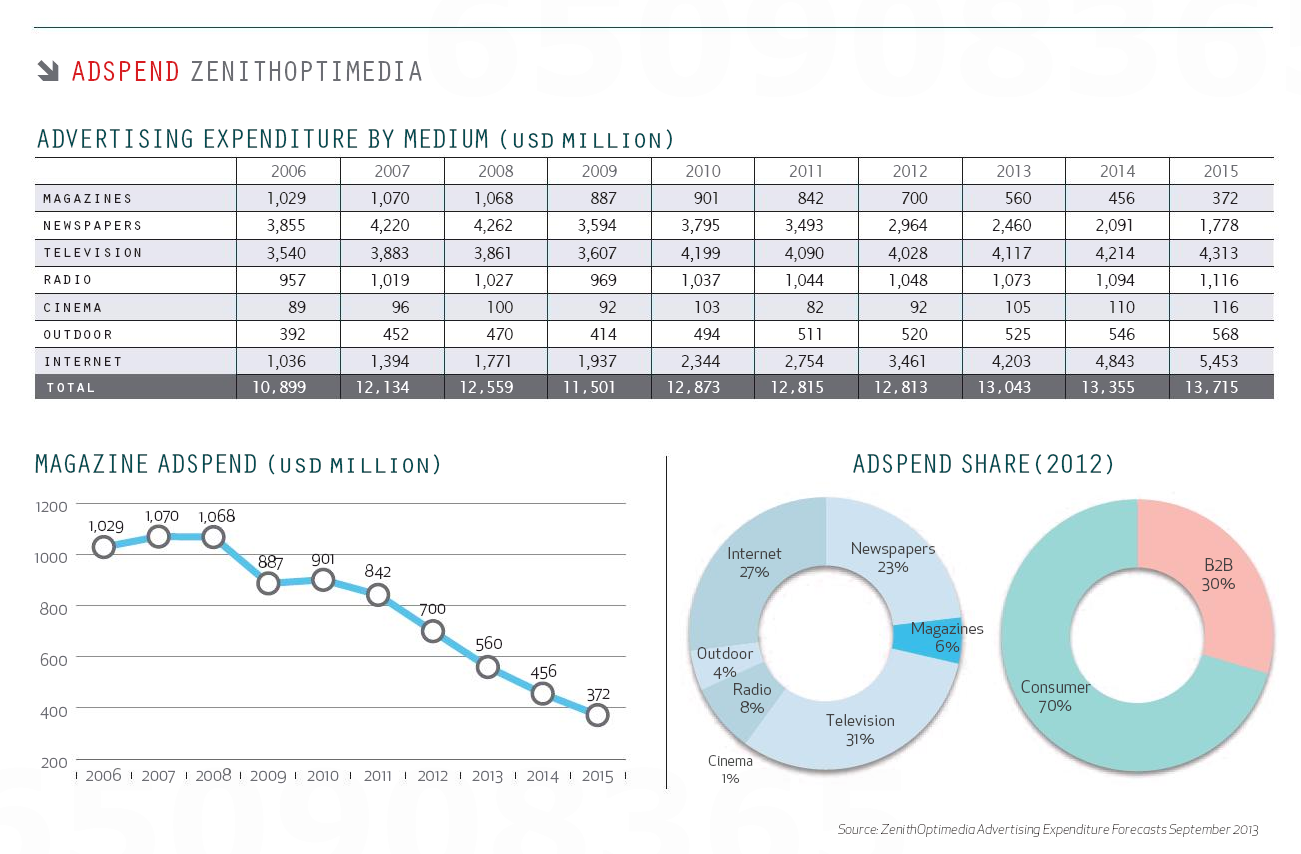 As the head of Publishers Australia; a non-profit association that represents the leading Business to Business (B2B), Business to Consumer (B2C), Custom and Digital Publishers in the country; I have been advocating for several years now that magazine publishers should stop focusing so heavily on the printed page and concentrate on selling their entire package of magazine media. This includes physical assets such as events and traditional display advertising, as well as digital assets like social media and an effective web presence.

Two of the main sources of internet growth are currently social media and online video. Social media is already 10% of internet advertising expenditure, and we expect it to grow 35% this year, while online video is at 8% of spend and is growing by 29%.Comment by Zenith Optimedia in FIPP’s World Magazine Trends 2013/2014 publication.

Multichannel advertising is the key in Publishing!

Ok it may sound like I am teaching you how to suck eggs, but giving away your online presence in order to get a print ad across the line is just bad business. Print space has a cost in ink, paper, print, binding, distribution, etc. Online has a cost too, and it not just bandwidth. When putting a package together that includes a social media campaign, web presence and print ad, publishers need to start including a price per line item. Too often I see the tablet ad given away to get the print business. Far too frequently is Facebook provided free of charge when a client commits to a print run. The problem is, as your print ad revenue continues to decline you will want to start charging for those ‘giveaways’ and this will be very difficult to do for existing clients who are used to receiving it for free.

Online advertising is a growing market, as evidenced above, and mobile is the fastest growing internet channel of them all.

Smartphone and tablet users have a clear appetite for high-quality content, and several immersive apps have shown that this is a demand that magazines can meet.Comment by Zenith Optimedia in FIPP’s World Magazine Trends 2013/2014 publication.

Sales reps need to be given targets and publishers need to support their sales teams. Charge accordingly for every single channel you offer to your client. Develop packages that allow your client to choose what channels they wish to participate. Make these packages sound attractive with descriptive terms such as Gold, Silver and Platinum. If you need to offer a discount to close the business then offer that discount off the bottom line. Do NOT give away a single channel for free.

Reports of my death have been greatly exaggerated – Print Media

But it is not just publishers who need to change their way of thinking, media buyers need to take a fresh look at magazines. John Steedman, Chairman of GroupM and one of the most powerful advertising buyers in the country, stated recently that his business is actively encouraging clients to take a fresh look at magazines and newspapers. In Mr. Steedman’s opinion, “advertisers have been moving away from print faster than readership and circulation figures are actually falling; and the negativity around print has been overcooked.”

A 2012 industry-wide survey of Australian magazine publishers indicated that nine in ten organisations (91%) expected the company’s total online revenue to grow, and that they were going to actively invest in digital platforms such as social media, web sites and tablet / mobile apps, to work alongside their print offerings.

New measurement metrics from EMMA, along with the established services from Roy Morgan, effectively track readership across print, web, tablet and mobile.

Advertising online offers several advantages over print. Viewing the latest SUV drive comparisons looks better in video than via printed statistics. However, the longevity of the printed product is well evidenced every day in medical waiting rooms, hotel suites, kitchen libraries and coffee tables everywhere, but it is now just one part of a multi-channel world.

I for one hope that print does not disappear in my lifetime. I love a new title and recent releases such as the Renegade Collective (a consumer title aimed at entrepreneurs) and Vet Practice (a custom title for animal healthcare professionals) have proven that the print is not dead. But the success of these titles lies not only in their ability to target a niche audience, but also in their marketing expertise and utilisation of the many different channels available to promote their publication.