We’ve all experienced that feeling of disappointment that comes with downloading a new update that feels more like a downgrade. Once upon a time, YouTube didn’t advertise before each video. There was a time when Snapchat didn’t give people the means to incessantly vomit rainbows.

Only a few weeks ago, the Google logo was old-school. It didn’t look like ‘children’s refrigerator magnets, McDonald’s French fries and Comic Sans’.

The latest change in technology is Apple’s iOS 9 update. The update has been designed to provide users with faster performance, improved security and added enhancements to apps. With the iOS 9, Apple has confirmed its support for ad blockers in mobile Safari, and, some people believe it won’t be long before ad blockers are the norm in all mobile web browsers. This may seem like a bad thing, as it’s now more difficult for websites to show their readers ads. But, was advertising on the mobile web ever worth it?

Why is ‘Appvertising’ a Good Option?

The best way for a marketer to communicate on mobile is through ‘appvertising’. This is particularly effective now, as iOS 9 users are not able to block ads in apps. In-app ads are much more effective than traditional banner ads on websites, as consumers generally don’t perceive them as advertising. This is because in-app ads are engaging, and thus rarely seen as intrusive. Of the 144 million monthly active ad block users globally, most are willing to view non-intrusive ad formats.

In the second quarter of 2015, American consumers spent, on average, 3 hours and 40 minutes per day on their mobile devices, a 35% increase in time spent from one year ago. 10% of time spent on mobile is spent in the browser, and 90% in apps. This indicates that banner ads were ineffective on mobile in the first place. People are spending less and less time using the mobile browser, so the audience for web ads on mobile is shrinking, even without ad blockers.

Medialets analysed some 300 billion data points from mobile ad campaigns and found that ads in apps get much higher click-throughs than mobile web ads. Travel and entertainment ads are the most successful, getting about a 60% higher click through rate than ads for automotive, retail and, other categories. 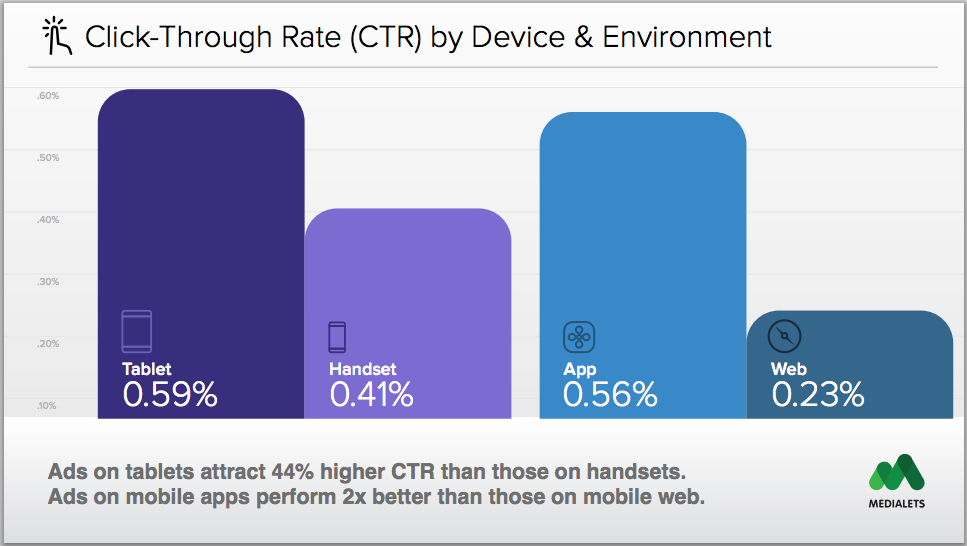 According to Microsoft’s research report on how digital is affecting attention spans, 77% of Canadians aged between 18 to 24 reach for their phone as soon as nothing is occupying their attention. On average, 3 in every 4 people use multiple devices at the same time. Although technology introduces new challenges for marketers, it isn’t a threat or a problem. It actually creates significant opportunities. Multi-screening trains consumers to be less effective at filtering out distractions and encourages people to constantly look for something new. This means that brands must work harder to maintain attention. After all, people are most likely to pay attention to communications which are delivered in the right context, at the right time. 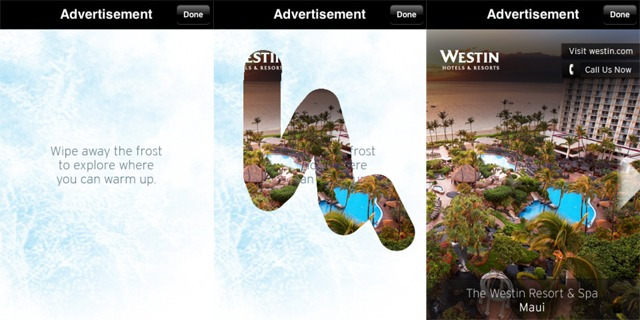 In 2013, the average human attention span was 8 seconds, a shorter attention span than that of a goldfish.This is why it is important for marketers to create engaging content. Rich media ads dramatically improve engagement, as you can see in the Westin ad, pictured above. The ad invites users to ‘tap to warm up’. After this, virtual frost covers the user’s iPhone screen. When the user wipes away the frost, pictures of eight Westin Hotels & Resorts in warm climates are revealed.

‘Appvertising’ allows marketers to actively grab the attention of potential clients. It’s a creative way to give consumers an enjoyable advertising experience. It’s important to be clear and personal as app-users will find value in being given relevant information at the right time. For example, most airlines have mobile apps allowing customers to check in and monitor their flight’s status. If a consumer was presented with a location-specific ad for this whilst using their phone at an airport, they would be much more likely to download the check-in app. At that particular point, they would be seeking any convenient alternatives to waiting in line or checking a flight status board. Keep in mind that if there’s something in it for the consumer, they will follow your call to action.

Apps allow you to leverage rich media and movement to provide an immersive experience, with an embedded call to action. Today’s marketing is all about instant gratification and appealing to consumers’ needs. Remember: an annoying ad is just spam, but a useful, engaging ad is customer service.

Apps create interactive and engaging experiences, so, make the move away from web advertising to in-app advertising. Apps created with Liquid State are versatile, location-aware, and user-friendly.