The comeback of Windows Phone

In a market currently dominated by Android and Apple iOS, Windows Phone has been pushed aside. But the end of 2013 saw Microsoft’s market share increase as Windows Phone claimed the title of the fastest growing smartphone platform, and it has been predicted that in three years Microsoft will overtake Apple. It has been a while, but finally it seems that Microsoft wants to reclaim their status as technological ‘world changers’ by becoming a major player in the mobile market.

Currently, Microsoft is no match to claim market dominance, with Android holding almost 70% of market share, but there is hope on the horizon. Windows Phone is the second most used phone in Latin America and India and is leading the market in emerging countries. Microsoft’s General Manager Todd Brix is expecting the new Windows 8.1 update, set to be released at the end of this month, to revolutionise the industry altogether.

Windows Phone 8.1 was formally unveiled at its Build Developer conference on April 2, revealing the numerous new features and updates that will be available. The main new feature is Microsoft’s planned integration between Windows 8.1, Office 365 and Xbox. ‘One Microsoft’ will provide a seamless integration between people’s business and home lives. The platform of new phones, tablets and Windows OS will provide better ways to monetise apps cross platform with easy to use tools.

The formal unveiling of Windows Phone 8.1.

With the success Office 365 has already achieved and the seamless integration that Microsoft will provide across platforms, it is sure to pick up new users. A low-cost integrated smartphone is something the market does not yet have and it is only a matter of time before people are sick of having their information stored on multiple platforms.

According to Kantar Worldpanel ComTech’s Strategic Insight Director Dominic Sunnebo, Nokia’s (and Windows Phone’s) marketshare increase is just due to them “sucking up remaining featurephone owners”. But global market intelligence firm IDC analyst Ramon Llamas says that this is not necessarily a bad thing. Android and Windows Phone are making strides forward in the mobile market due to their affordability – although Android currently has a much higher market share it this same factor that is allowing them both to move ahead in the market.

“Both platforms have a selection of devices available at prices low enough to be affordable to the mass market, and it is the mass market that is driving the entire market forward,” says Llamas. 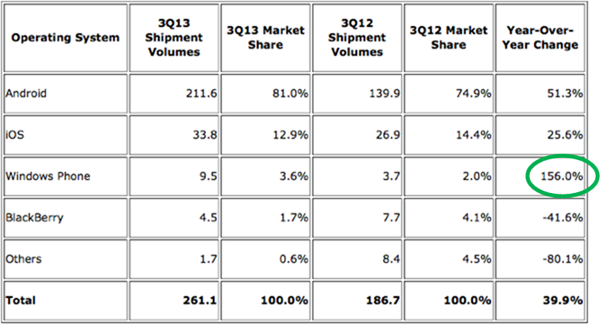 Other new major features of Windows Phone 8.1 includes a notification action centre panel, a personal assistant – Cortana (an answer to Android’s Google Now and Apple’s Siri) on-screen navigation buttons and a Use My Location section that will offer improved app suggestions. It has also been reported that some new handsets could feature 3D touch which detects user’s gestures without them touching the glass.

Nokia also unveiled two new smartphone devices at the conference, all of which will feature the 8.1 update.

One thing that has personally deterred me from buying a Windows Phone in the past is that they did not have many of my favourite apps such as Instagram, and the major apps they did have, such as Facebook, are much less-developed. It is an area that Microsoft is attempting to keep up with –Windows Phone users were able to get Instagram, Vine and Waze at the end of last year. Brix says they are looking for more popular apps to add in the near future, as well as providing great new apps available to Windows-only users.

The apps available to Windows Phone are still limited though as many app developers claim the market isn’t big enough to devote their resources to and are holding out until there are more available apps. It’s a catch 22 that Microsoft needs to resolve before they truly can take on the key players in the market.